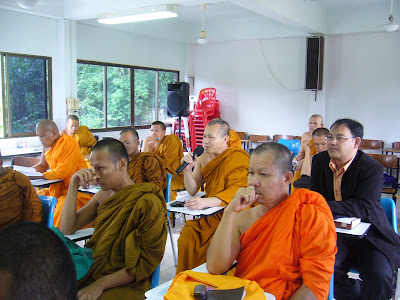 Completion of Campaign for Aholition
The Union for Civil Liberty in Thailand has just completed a campaign for abolition of the death penalty in Buddhist centres of learning throughout the country. The objective was to enlist the support of Buddhist monks in a campaign against the death penalty, in the expectation that the Buddhist abhorrence of killing any creature would make them natural allies. 22 seminars were held; the total number of participants was 1,404+ with an average of 70 at each seminar. The attitude of Thai monks to the death penalty may be indicated by quoting two reactions from a recent seminar:
1.“The first principle of Buddhism is an absolute prohibition on inflicting harm or on killing, actions which violate life itself. Capital Punishment belongs to ancient times. We are in a new world and civilization has progressed. Punishment should entail respect for the value of life and not have recourse to the death penalty which has no purpose. Instead, the guilty person must be given the opportunity to do good for the period of life that remains and so make restitution for the evil done in the past.”
2.“I agree with the death penalty. All creatures on the earth are subject to Fate (Gam) and are ruled by its outcome and circumstances. Those who do what is right will achieve good, those who do what is evil will suffer evil”.

Our aim has been to recall to monks that the first reaction is a truer expression of Buddhist teaching.
Posted by hrdefender at 3:31 AM