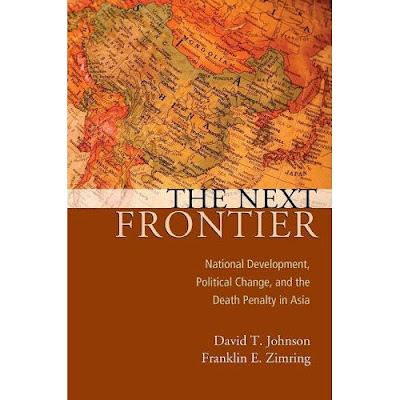 ‘Whether the death penalty is retained in law or practice is one of the prime indicators of the level of democratization and civilization of a country’
Kim Dae Jung, ex-President of Korea and Noble Prize Laureate, in Foreword to ‘The Next Frontier’

‘The Next Frontier’ is a handbook that contains an immense amount of data on the death penalty in Asia, usually updated to 2008, making it an essential reference work. For whom? Well, no doubt for scholars to whom the authors issue invitations to progress further in areas where they indicate topics of further interest. But the clear and accessible style render it of use to all those concerned with the death penalty, especially to those in government, legal personnel, and above all to activists engaged in the struggle to banish the death penalty from society. A Philippine lawyer who was involved with an association of the relatives of the condemned told me of the interest and ability of those with little formal education who were motivated to consult and use, on their own initiative, even scholarly works on the death penalty. The present work can add to the armoury of such involved persons.

The book consists of three parts and seven appendices. The first part considers ‘Issues and Methods’, providing an overall survey of the extent and practice of capital punishment in Asia. A second part consists of ‘National Profiles’ of the practice of the death penalty in Japan, the Philippines, South Korea, Taiwan, and China. A final section draws lessons from the case studies, and comments on the pace of change and prospects for abolition in the region. Shorter summaries of the death penalty in North Korea, Hong Kong and Macao, Vietnam, Thailand, Singapore, and India are consigned to appendices, as is a discussion of extrajudicial killing, which often surpasses the rate of judicial killing in Asia. While lacking the detail of the nation profiles, the appendices provide valuable and accurate summaries.
Posted by hrdefender at 9:02 AM