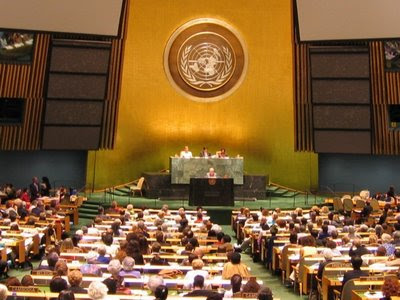 UN Resolution for a Moratorium on the Death Penalty

The UN in full session is like a huge oil tanker, ploughing through high seas and storms, only slowly adapting its great momentum to change course. Such a momentous change was the adoption of a resolution on 18th December last to suspend the death penalty world wide. The UN General Assembly was born out of the terrible experience of two world wars, the slaughter of millions, and the questioning of what had been thought to be a state of civilisation. Sixty years ago the UN proclaimed what we would now call a road map, ‘the Universal Declaration of Human Rights’ a document of great simplicity but immense compass. Over those sixty years there has been some progress in achieving its aim of freedom and security, although progress in one area or place is often accompanied by regression elsewhere; war, famine, disease, senseless killing and cruelty remain the still, sad music of humanity.

But there has been progress in achieving the most fundamental of all its promises. The passing of a resolution on a moratorium on the death penalty, acknowledges that the words ‘Everyone has the right to life’ in Article 3 of the Universal Declaration, is now an achievable goal. Yet, the resolution limits itself to an expression of ‘deep concern’, asking that the death penalty be progressively restricted and the number of offences for which it may be imposed reduced. Such language of compromise and persuasion prevails, but the original strong mind of the Universal Declaration also rings out, ‘Establish a moratorium on executions with a view to abolishing the death penalty’. It is known that the formulation ‘Everyone has a right to life’ were the most contested words of the Declaration. While some wished to extend the words to outright prohibition of the death penalty, others wanted the legitimacy of the death penalty to be explicitly sustained. What we inherit is an incomplete phrase, whose meaning the resolution of 18th December has now further revealed.

Twice before, such a motion was introduced to the UN, but failed to reach a vote in the General Assembly. On this occasion, despite strong opposition, the motion advanced and the final vote tallied a majority of 104 votes in favour, 54 against, and 29 abstentions. The most heartening aspect of the vote was that 20 states that still have the death penalty voted in favour of the resolution. The stand of those opposing the motion is revealing. The , the major ideological purveyor of the death penalty in the world, was uncharacteristically silent in the debate. This is probably due to signs of a coming ground change on the issue in the where the legality of lethal injection is being strongly contested. It is also being realised that the cost of execution and adequate legal defence is more expensive than life imprisonment. too, the major executioner in the world, was unwilling to engage in the debate and expose its legal system to public censure. The most virulent opposition to the resolution came from that world champion of human rights, , which asserted its right to execute whom it wishes, denying others the right to comment on its internal affairs. Strangely, this mini state which aspires to participate in every western economic, industrial, banking, and cultural practice, objects to the imposition of western standards supporting abolition of the death penalty. One may ask whether from the viewpoint the UN itself is too ‘western’ an institution. And if it is, does that make the right to life less valid?

The part played by in the debate was also inglorious. In a speech expressing opposition to the Resolution the Thai delegate echoed the language of , affirming the necessity of the death penalty as a deterrent. But also, when questioned by Italian sponsors of the Resolution he responded in words which reflect shamefully on this , saying that “the Thai Constitution has not been changed and still called for the death penalty, that some lives were not worth keeping and should be executed”. Meanwhile the Thai population is largely uninformed about world opinion regarding the death penalty and accepts the model of practice in the , where a Thai team learned the craft of lethal injection. It is time for moral leadership from civil, political, and religious leaders to follow the recommendation of the United Nations General Assembly to accept a moratorium on executions, and to enter into an examination of a barbaric practice which is surely destined to vanish from the earth. The majority of the world’s nations have concluded that the death penalty is not a deterrent to serious crime, that it is not a proportionate punishment for drug crimes which form the largest number of capital crimes in , and that the occurrence of wrongful execution of the innocent is not avoided. The moratorium is intended to allow an opportunity to begin the process of reflection on capital punishment, to assess the evidence which has led the majority of the world’s countries to abolish it, and to discover the motivation within Thai religious and cultural traditions for a choice in favour of life. The assurance to future generations that ‘Everyone has a right to life’ will enhance the value of every life and emphasize that there are no useless people. It is time to begin. If not now, when?

Posted by hrdefender at 8:56 AM