First Execution of Thai Citizens in Over Three Years 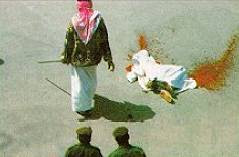 Riyadh - Two Thai nationals convicted of drug trafficking were beheaded with a sword in Saudi Arabia on Monday, 7th May, the interior ministry said in a stateฌment carried by the official SPA news agency.

The ministry said the two men were executed in the eastern city of Dammam for smuggling a "large quantity of hashish" into the kingdom hidden inside sporting equipment.

The latest beheadings brings to 55 the number of executions announced by the Saudi government so far this year.

For the whole of 2006, at least 37 people were executed, while 83 were put to death in 2005 and 35 the year before, according to AFP tallies based on official statements.

Executions are usually carried out in public in Saudi Arabia, which applies a strict form of sharia, or Islamic law. Rape, murder, apostasy, armed robbery and drug trafficking can all carry the death penalty.

The execution is the first execution of Thai citizens anywhere in the world in over three years. It is particularly regrettable that the execution was carried out for a crime relating to drugs which international law no longer considers to be in the category of 'most serious crimes' (Article 6 of International Covenant on Civil and Political Rights).

LETTERS TO THE EDITOR, Nation Newspaper, 15th May 2007

Where are the official voices of protest when ordinary Thais suffer brutalityRe: "Thais beheaded in Saudi", News, May 8. It is with increasing amazement that I observe the days pass since the announcement in your newspaper of the beheading of two Thais in Saudi Arabia on charges of importing hashish, with no whimper of protest from those usually most sensitive to any aspersion on Thai honour.
Do we have a Ministry of Foreign Affairs that might interest itself in the wellbeing of its citizens abroad? The right to life of a Thai citizen has never been proclaimed in a Thai constitution. But at a time when an august minister of the present government is making a career out of protesting other slights to Thailand's culture, one might expect some response to the cruel beheadings.
The crime of the unfortunate Thai workers killed in such a brutal fashion has been clearly defined to be outside the category of "serious crimes" in international law for which the death penalty might be imposed. This ruling of the UN Commission on Human Rights was clearly spelled out in Geneva to the Thai government on the occasion of their report on Thailand's observation of the International Convention on Civil and Human Rights.
As Thai and other citizens are still condemned to death in Thailand for drug-related crimes, it appears the lesson is ignored. Nevertheless, when Thai citizens are subject to a horrible reprisal elsewhere, one would expect some official or popular reaction.
Saudi Arabia is a state violating the most basic human rights. But at least one may raise a voice of civilized protest. Ironically, Saudi Arabia is presently reacting adversely to the sentence of 10 years' imprisonment passed in a French court against a member of its royal family, Prince Nayef Bin Fawaz al-Shalaan, on charges of importing cocaine into France, and presently residing outside the jurisdiction of the court.
Can we remain silent when simple Thai migrant workers are horribly executed while a Saudi Arabian prince guilty of the same charge is claimed to be inviolate?