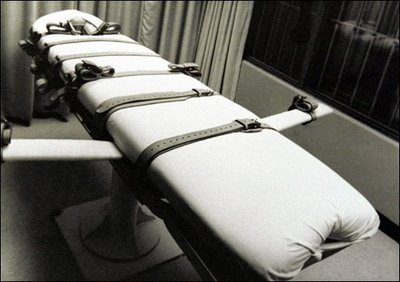 In his autobiography “The Last Executioner” Chavoret Jaruboon describes steps leading to ’s adoption of execution by lethal injection: “Some prisons in started using lethal injection back in 1977. Bang Kwang wanted to move with the times. Our forward-thinking chief sent researchers over to to study the process of injecting a criminal with chemicals”

Lethal injection involves the introduction of three chemicals into the veins of the condemned prisoner. The first is a sedative inducing unconsciousness, the second paralyses the muscles and the third causes the heart to stop. If the sedative does not act correctly the two following chemicals cause extreme pain. Several other states are encountering the same difficulty. On Wednesday last a condemned person being executed in took 34 minutes to die. The governor of , Jeb Bush has ordered a suspension of executions and the creation of a commission of inquiry on the process.

Executions in have been suspended since February last.

In fact there is no solution to the problems of execution. The proposal that a medical doctor participate in executions to confirm that the sedative has succeeded is rejected by the medical profession.

The medical profession in has long since issued a statement that doctors or nurses are unwilling to participate in executions (see posting below, Statement of Thai Medical Personnel).

The for Civil Liberties proposes that delay no longer in joining the majority of the world’s countries in abandoning forever the barbaric practice of the death penalty. The writing of a new constitution is an opportune time to take this momentous step in protecting the right to life in .

Posted by hrdefender at 9:21 AM