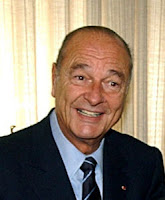 On 3rd January President Jacques Chirac of France vowed to forbid the death penalty absolutely and in all circumstances. Now approaching the end of his presidency he is keeping his promise. A change in the French Constitution is being proposed to the Council of State in January, in the words: NO ONE CAN BE CONDEMNED TO DEATH

France already abolished the death penalty 25 years ago, now it does so irreversibly. In the words of a spokesperson of Amnesty International France; "In enacting a constitutional prohibition on the death penalty, France is sending a strong message to all governments maintaining this cruel, inhuman, and degrading punishment".

However, France could make a further step by acceding to the Second Optional Protocol of the Covenant on Social and Political Rights which would confirm its commitment to the community of nations.

South Africa, Ireland, and Germany already prohibit the death penalty in their Constitutions AND have signed the Second Protocol.

Posted by hrdefender at 4:47 PM