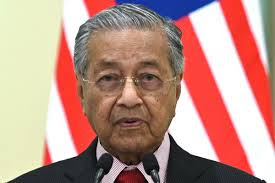 In a news item referring to the Lukman case on September 18 of last year, subject of an earlier posting on this website, Prime Minister Mahathir, obviously speaking fom the viewpoint of his earlier intention to totally abolish the death penalty, expressed a readiness to review the case. Words blowing in the wind, in the about turn recently reported and subject of the previous posting.
"Kuala Lumpur: Prime Minister Tun Dr Mahathir has indicated that the government should review the case of a man who had been sentenced to death for having medicinal cannabis oil.

Dr Mahathir said: " I think we should review that," when asked about the case of Muhammad Lukman, a 29-year-old father of one who was sentenced to death for possessing, processing and distributing medical marijuana (cannabis oil).
He was arrested in 2015 for the possession of 3.1 litres of cannabis oil, 279 grams of compressed cannabis and 1.4kg of substance containing tetrahydrocan nabininaol (THC). Muhammad Lukman was given the death sentence by the Shah Alam High Court on Aug 30preme light.” The Star/2018/09/18

However, Prime Minister Mahathir, while retaining Malaysia's attachment to the death penalty, you can invoke “General comment No. 36 (2018) on Article 6 of the International Covenant on Civil and Political Rights, on the right to life”.
The document urges strict observance conditions in international law on imposing executions, emphasising that the "right to life" is the supreme right from which no derogation is permitted by situations of armed conflict or other public emergencies. The consequence is that in states which have not yet abolished the death penalty, "it must not be applied except for the most serious crimes, and then only in the most exceptional cases and under the strictest limits."

Voila! No need to go through a delay prone constitutional change Apply this criterion to the Lukman case, prohibiting his execution and ordering his release. Leave it to the dogs of war who have forced retention of the death penalty on you to invalidate the triple legal bond in the above quotation from the authoritative comment on your binding international UN ICCPR treaty.
"But screw your courage to the sticking place, and we'll not fail"  Lady Macbeth
Posted by hrdefender at 12:07 PM