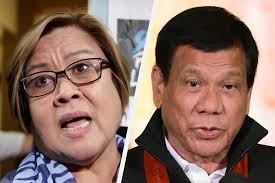 As President Duterte twists and turns to restore his policy of extra-judicial killings, the death penalty by another name, his former opponent, in detention since February of this year on an unfounded charge of "aiding" drug lords, again proclaims opposition to his policies in a statement issued on
International Human Rights Day, 10th December 2017


“Here in the Philippines, acting on instructions, instigations and incitements from no less than the President, the police and vigilantes have killed more than ten thousands of alleged drug offenders in a spate of extrajudicial killings (EJKs) under the so-called war on drugs, which is actually a war against our people, especially the poor.


In the face of these mass atrocities, governments and inter-government bodies appear to be either ineffective, inadequate or simply passive. In the Philippine situation, the International Criminal Court (ICC), through its prosecutor, has yet to decide whether there is basis to proceed to a preliminary examination of the cases. At the UN, we have yet to see concrete measures coming from the Security Council, the Human Rights Council, or the General Assembly, beyond what happened last September during the Universal Periodic Review of the Philippine human rights record with the joint statement of concern from 40 states led by Iceland, and similar language spoken by the UN High Commissioner for Human Rights. Domestically, the President and his Foreign Affairs Secretary have been consistently blocking the proposal to invite the UN Special Rapporteur for extrajudicial killings to do a country visit. Worse, there are no serious investigations and prosecutions being done on the killings.


Meanwhile, with the return of the police to the drug war, Duterte is boasting that there will be an increase in the body count.
The killings must stop. But, how? We call on governments all over the world to make good their commitments to actualize the promise under Section 28 of the Universal Declaration of Human Rights: “Everyone is entitled to a social and international order in which the rights and freedoms …can be fully realized”

In the Philippine situation, in particular, we urge that:


a.    The General Assembly to pass a resolution condemning the extrajudicial killings, urging its immediate stoppage, and recommending the prompt and effective investigation and prosecution of perpetrators and masterminds;


b.    The Human Rights Council to establish an independent international commission of inquiry or an investigative commission to ferret out the truth and identify accountabilities for the mass murders;


c.    The International Criminal Court, through the Prosecutor, to commence the preliminary examination of the cases of EJKs; and


d.    The Philippine government to finally extend the invitation to the UN Special Rapporteur on summary and extralegal executions.


More than the government actions, however, and in light also of the growing absence of human rights leadership in this highly troubled world, there is an urgency now for international solidarity and mobilization of public support to uphold, defend and protect human rights. We cannot remain silent and depend passively on governments. We the people ourselves have to act – act with urgency and in solidarity with each other. With political leaders themselves demonizing their own people, and even instigating the widespread attacks against them, the need for all of us to stand up for the basic values of human dignity and equality of everyone everywhere has now become extremely urgent. “
Posted by hrdefender at 11:52 AM