The Young of Europe Favour the Death Penalty 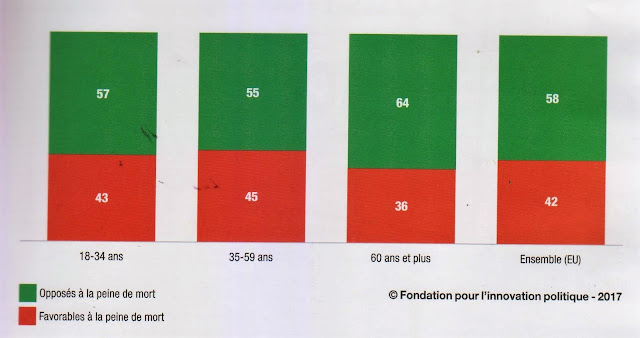 The above image shows the percentages of those opposed and those in favour of the death penalty in 26 countries of the European Union, in three age groups and combined. While we in Thailand who  campaign for abolition of the death penalty in our country, often refer to what we thought of as the glorious example of Europe, the reality is rather different, especially in the younger age group. We forgot that the roots of the death penalty, like virulent weeds, live on. A continued attention to education is needed to stop the hidden growth of a return of this ancient curse, so easily accepted as a solution for crime, and so satisfying to the appeal of vengeance.
While the percentage of Europeans favouring the death penalty is 42%, the percentage in Belgium, one of the founding states of the Union, is 52%. Surprisingly, France, arena of the famous abolitionist Robert Badinter, with 49% of the population supporting the death penalty, is not far behind.
Further statistics and comparative data will be added later to this posting. Full results of the surveys published under the heading, "What Next for Democracy" are available on the website fondapol.org


EU Countries having a majority in favour of death penalty

For all EU countries combined, those in favour of death penalty are 42%


Belgium is an EU foundation member, the other countries were formerly members of the Soviet bloc

Contrasting figures for France and Germany


In France percentages of 18 to 34 years old in favour and opposed to the death penalty are 50:50


In Germany for the same age range the percentages are 33:67
Posted by hrdefender at 1:45 PM