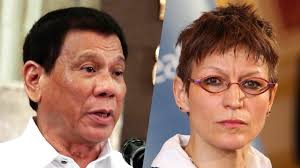 United Nations Special Rapporteur Agnes Callamard, on May 5th, delivered a speech at drug policy convention at the University of the Philippines Diliman.