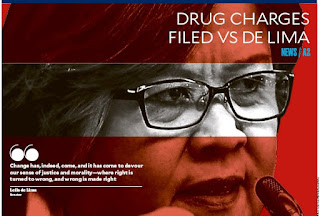 The Philippine War on Drugs by President Duterte's campaign of extrajudicial killings has taken a bizarre turn with an accusation against his foremost critic that she herself presided over an illegal drug trade. (See posting below on "Women take a lead in opposing Duterte killings")

The Department of Justice (DOJ) filed criminal charges against Sen. Leila de Lima on Friday over allegations she presided over the illegal drug trade at the national penitentiary when she was the justice secretary. De Lima said she had expected the move and scored the Duterte administration for its “vindictive politics.” She said she was bracing herself for becoming “the first political prisoner” under the regime of her archenemy.

“As expected, the DOJ today filed criminal charges against me with the Regional Trial Court of Muntinlupa,” De Lima said in a statement. “My lawyers are already on top of the situation and will be filing the corresponding motions as soon as the cases are raffled to a specific branch.” De Lima said the DOJ resolution finding probable cause against her was a “travesty of truth and justice".