A Killing that is an Execution 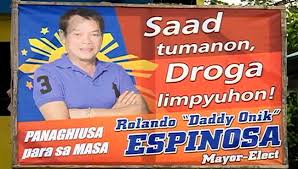 Senator Ping Lacson asks police leadership to give real story on killing of Mayor Espinosa. Duterte says he believes police story–that Espinosa was slain in shootout inside his cell. Spokesperson says President’s comment was ‘simply an assumption of regularity’

Sen. Panfilo Lacson on Friday said the police leadership should tell President Duterte the real story behind the police killing of Albuera Mayor Rolando Espinosa Sr. inside a jail in Leyte, following an initial Senate finding that the slaying of the alleged drug trafficker was premeditated.

Mr. Duterte, speaking to reporters after arriving from a trip to Thailand and Malaysia late on Thursday, said he believed the police account that Espinosa was killed in a shootout with officers who had come with a warrant to search his cell for weapons and drugs before dawn on Nov. 5.
“I believe in the version of the police,” Mr. Duterte said.
“[If they] have evidence to prove otherwise, then a case should be filed against the police,” he added, referring to the Senate investigators.
The Senate committee on public order and dangerous drugs headed by Lacson opened an inquiry into Espinosa’s shooting death on Thursday and heard testimony from officers involved that led to the initial finding that the killing of the mayor was premeditated.
Police story
The Philippine National Police Criminal Investigation and Detection Group (CIDG) in Eastern Visayas (Region 8) claimed that officers from the group went to the Leyte subprovincial jail in Baybay City before dawn on Nov. 5 with a warrant to search Espinosa’s cell for weapons and drugs.
But Espinosa fired at the policemen, forcing them to shoot back, killing him.
Another inmate, Raul Yap, was killed in the shootout.
Crime scene investigators recovered guns and sachets of “shabu,” a highly addictive form of methamphetamine, in the two men’s cells.
The Leyte provincial police investigated the killings, found there was no shootout, and directed the Regional Internal Affairs Service to conduct a separate probe.
During Thursday’s opening hearing, the senators heard testimony that at 3:49 a.m. on Nov. 5, Supt. Santi Noel Matira, leader of the CIDG-8 raiding team, called for crime scene investigators to join the operation. The team, however, entered the jail at 4:30 a.m.
That, to Lacson, a former PNP chief, meant only one thing: the policemen went to the jail to kill Espinosa.
‘Premeditated’
“You had not even entered [the jail but] you were already calling for [crime scene investigators]? Were you anticipating that you were going to kill someone?” he said. “It’s like calling the funeral parlor [before someone has died].”
Lacson earlier described Espinosa’s death as a “clear case of extrajudicial killing.”

OnThursday, he said, “There’s one word to describe this: premeditated.”

Several senators said they believed Espinosa was eliminated, as he had submitted a statement linking politicians, policemen, including some narcotics officials, to his illegal drug business.
On Friday, Lacson said the PNP leadership should tell Mr. Duterte what really happened.
“Their chief and, if possible, the command group and the key officers should request for a noholds-barred meeting with [the President],” Lacson said.
The PNP leadership, he said, should deal with concerns from top officials about how “overeager elements” on the force are “bypassing the chain [of command]” and feeding the President incorrect information.
Lacson, who still has sources within the PNP that he once headed, said several “top and middle level officials” had been airing such concerns “for quite sometime.”
The Office of the Ombudsman will investigate the killing of Espinosa.
Ombudsman Conchita Carpio Morales confirmed to reporters on Friday that she had formed a group to look into the mayor’s death.
The National Bureau of Investigation and the Supreme Court are also investigating the matter.
Senate Minority Leader Ralph Recto said he was “not surprised” that Mr. Duterte accepted the police version of the killing.
“He made a calculation and decided to take the side of the CIDG Region 8. I hope that his taking their side will not lead to more abuses to be committed by rogue PNP elements,” Recto told the Inquirer in a text message.
‘Assumption of regularity’
Mr. Duterte’s spokesperson, Ernesto Abella, said the President’s comment was “simply an assumption of regularity.”
The PNP investigation is going on, and “the whole process will unfold,” Abella said.
He said Mr. Duterte was bound to go by the results of the PNP’s investigation.
Before leaving for Thailand on Wednesday, Mr. Duterte said he found nothing puzzling about the killing of Espinosa, whom he publicly linked to the illegal drug trade in August.


“You have here a guy—government employee—using his office and money of the government cooking shabu and destroying the lives of many millions of Filipinos. So what is there for me to say about it?” he told reporters.


Meanwhile, the Philippine parliament is attempting to pass legislation, before the year end, to restore the death penalty,

Posted by hrdefender at 3:55 PM