Four condemned to death in Vietnam, three of them women one of whom is Thai 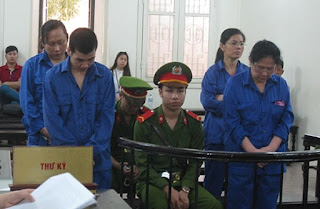 A court in Hanoi sentenced three Vietnamese and a Thai woman to death on Monday for drug trafficking.


Police in Hanoi, Quang Ninh Province and HCMC busted the ring in October 2012, seizing 24 kilograms of heroin and more than two kilograms of methamphetamine.


The members told police Trang was the mastermind and hired them to transport drugs across regional countries including China, Cambodia, Nigeria, Malaysia, Thailand and the Philippines.


Police said the gang also hired some Africans who used money to lure poor Vietnamese women, who had little knowledge about drug laws, into the illegal business. They are still looking for these suspects.
Thanh Niem News

Note: As reported in an earlier item; under a revision, which takes effect July 1, 2016, Vietnam has announced abolition of the death penalty for seven crimes: surrendering to the enemy, opposing order, destruction of projects of national security importance, robbery, drug possession, drug appropriation and the production and trade of fake food.
Posted by hrdefender at 3:30 PM