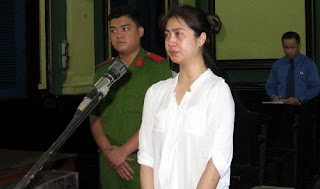 Thai woman sentenced to death on drug charge in Vietnam
News of a significant advance in abolition of the death penalty relates to penal code reformation in Vietnam. In South East Asia the majority of death sentences relate to drug related crimes. It is thus of great interest that Vietnam has abolished the death penalty for drug related crimes. However, the full implications of the change are still unclear. We reproduce the following news item from Aljazeera, but await more complete information on the change.
There are at least two Thai women condemned to death in Vietnam as drug couriers. Presumeably their lives will be saved by the new legislation. Meanwhile Indonesia has executed a Vietnamese woman on drug charges despite appeal by the Vietnamese government that she be spared.
The report of the penal code reform will certainly have influence on the execution on drug charge policies of other South East Asian countries.

A revision to the penal code eliminates the death penalty for crimes such as drug possession, fraud and corruption
November 27, 2015 8:11AM ET


Death sentences imposed on corrupt Vietnamese officials will now be commuted to life in prison if they pay back at least 75 percent of the illegal money they made. The change is part of a revised Penal Code that an overwhelming majority passed in the National Assembly on Friday, online newspaper VnExpress reported.
Under the revision, which takes effect July 1, 2016, the country also will abolish the death penalty for seven crimes: surrendering to the enemy, opposing order, destruction of projects of national security importance, robbery, drug possession, drug appropriation and the production and trade of fake food.


The revised law will also spare the lives of those who are 75 years old or older.
The ruling Communist Party has made fighting corruption one of its top priorities. However, some lawmakers had voiced opposition to the changes when they were debated in the assembly in June, arguing that they would weaken the fight against corruption. "This would create a loophole for corrupt officials to use money to trade for their life," state media quoted deputy Do Ngoc Nien as saying at the time.


International human rights groups and some international governments have been urging Vietnam to abolish its death penalty. Local media reports estimate that there are 500 people on death row in the country
Aljazeera Report
Posted by hrdefender at 5:49 PM