Singapore which claims success in countering drug trafficking and ascribes the supposed success to its practice of mandatory death sentencing,  yields in exempting certain cases from mandatory death sentences. Academic studies have long disproved the effectiveness of executions in countering crime. But it appears that Singapore is finally forced to admit that mandatory executions are inappropriate when confronted with the inhumane absurdity of the practice.
The death penalty will be changed, allowing judges discretion to impose life imprisonment in certain specific instances of drug trafficking and murder. The announcement of the change in policy says that the leniency will apply to mere couriers of drugs, not the drug kingpins and distributors. But when has Singapore succeeded in arresting the higher echelons of the drug trade, rather than the fumbling nervous couriers?
The relaxation of mandatory death sentences will apply under two conditions:
"First, the trafficker must have only played the role of courier, and must not have been involved in any other activity related to the supply or distribution of drugs. Second, discretion will only apply if having satisfied this first requirement, either the trafficker has cooperated with the Central Narcotics Bureau in a substantive way, or he has a mental disability which substantially impairs his appreciation of the gravity of the act."

But we must not think that Singapore is embracing any quality of mercy. The mandatory death sentence will be replaced by life sentence in prison, and caning. Singapore's executioner used to comfort those whom he was about to dispatch to a 'better life", by assuring them that their fate was preferable to life imprisonment in Singapore's jail. He may have been right. But just to give an extra tilt to the balance of justice, the new sentence throws in a measure of the abominable practice of caning, a process which leaves everlasting scars on the body, marks of degradation and reprisal. 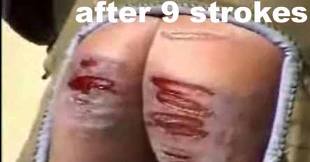 Singapore provides an elaborate cover story to justify its changes in sentencing. In reality the steps leading to the change are:
1. The contradictions in practice. While Singapore claims that the basis of its capital punishment policy is deterrence, the statistics of executions are hidden, no doubt to inculcate fear while maintaining a benign face.
2. Claims that Singapore justice is equal for all have been discounted The rich and well connected can escape sentence. The poor and unrepresented are hanged
3. The increasing juridical isolation of Singapore in its claim to be democratic while denying the right to life.
4. All of these faults of justice have come to a head in the case of the young Malaysian, Yong Vui Kong, arrested at the age of 19 whose story is told below in a posting made on May 25th last. Protest and outrage has been expressed across the world at the seeming certain execution of this young man. At last Singapore has found a way out. Yong Vu Kong is likely to be the first to escape execution, and relieve Singapore of acute embarasment.

We do not thank you Singapore for this concession, the alternative you offer is a regression and further diminution of respect for human rights.
Posted by hrdefender at 7:37 PM

Thanks for great information you write it very clean. I am very lucky to get this tips from you.