If the Innocent are Executed?

At last there is closure to one of the saddest misjudgments in judicial history.
In 1980 the two month old child of Linda Chamberlain was killed in an atrocious manner while the parents of the child were on a camping holiday near Ayer’s Rock in Central Australia. The parents of the child were arrested and charged with the murder. In their defence they claimed that the child had been taken by a dingo, an Australian wild dog. But the prosecution claimed that the awful wounds on the child’s body had been caused by a scissors to simulate the claws and fangs of a dog. In the very emotional climate that followed news of the child’s death, the mother was found guilty and sentenced to thirty years imprisonment with forced labour. Her partner, accused as an accomplice, escaped with a suspended sentence. But Linda Chamberlain continued to protest her innocence, and three years after sentencing the mother was released from prison on the finding of clothes of the infant near the lair of a dingo, which supported Linda’s claim. But popular opinion still considered her a murderess and she suffered continual attacks and insults.
On the 12th June of this year, a court has finally ruled that the death was indeed caused by a dingo. The mother still raises questions of her conviction on the energetic charge that she was the killer, by police who were eager to satisfy public opinion at the time.
At last justice is done. Comments on the story in newspaper columns are mostly asking, why the fuss about an event which happened long ago in a far off place. But one commentator asked:
“A small reminder for supporters of the death penalty: that crime created an emotional climate in which the mother was found guilty of murder and sentenced to 30 years hard labour. And if she had been condemned to death? Could she be brought back to life today to receive justice?” 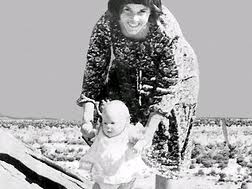 Mother Linda and her child Azaria
If there were no other argument against the death penalty, this story would suffice to put an end to it. We are always met with indignant questions that follow a savage killing; is the murderer to escape retribution for his crime? No, the murderer must not escape punishment. But should not the execution of a person who is possibly innocent outweigh the supposed satisfaction of a revenge matching the savagery of a crime? The outcome reveals human fallibility. What seems certain is never so. And even if the judgement approaches the near certainty of a public event, what is the benefit of matching one atrocity with another, killing a perpetrator to prove that killing is wrong?
Posted by hrdefender at 7:44 PM