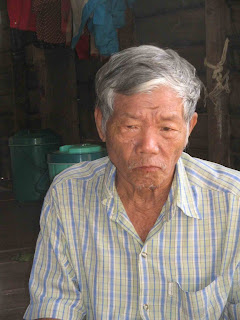 The story may be found in the archive (13/5/2007) of a Karen villager condemned to death for a murder committed 19 years earlier. The trial and sentence were blatant miscarriages of justice, but four years were to pass before the case was dismissed by the Appeal Court. Meanwhile the unfortunate villager, 66 years old and in poor health, was confined to prison. Bail was refused on the unlikely ground that he might try to flee, to where who knows. While he was in prison his wife died but relatives concealed the news from him as he was already in a depressed state.
He has been released, and has returned to his village in the mountains. There has been no compensation paid for the miscarriage of justice and the last years of his life spent in cruel confinement.
Here is his picture, a man who has suffered, and who still waits for justice.
Posted by hrdefender at 4:05 PM