Hangings in Iran, an Infamous Record 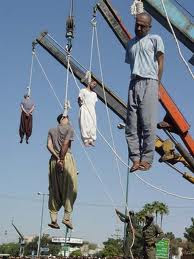 During the first week of 2012, the Iranian authorities achieved a new record by hanging 1 person in every 4 hours. They executed 39 people in different cities, including three in public in the western city of Kermanshah. According to Amnesty International, more than 600 executions were carried out in Iran in the first 11 months of 2011. This is a marked increase over at least 553 executions recorded in the whole of 2010 and is likely to make 2011 the worst year in two decades since 1991, when at least 775 executions were recorded
Posted by hrdefender at 10:52 AM