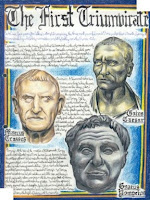 Figures for Thailand are: prisoners on death row 759; death sentences in 2010,53; most recent executions, 2 persons in 2008.
In summary, Cuba is very low on the list of retentionist countries, while Indonesia, Nigeria, and Thailand are comparable middle level executioners. The only hope of strong recommendation to abolish the death penalty rests with interventions from countries attending the UPR.
Posted by hrdefender at 2:16 PM