Conference on Prison Conditions in Thailand 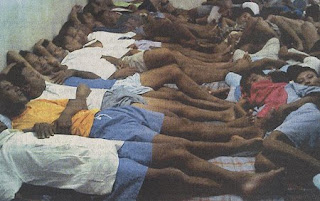 As the possibility arises that Thailand will replace the death penalty with life imprisonment, we turn our attention to conditions of long term imprisonment. On 31st May UCL organised an afternoon conference on prison conditions in Thailand. What follows is a BBC report on the conference.
Prisoners in Thailand kept 'shackled and cramped'
By Vaudine England BBC News, Bangkok
An independent rights group in Thailand, the Union for Civil Liberties, has opened a campaign to improve conditions in Thailand's jails. It has issued a report on prisons which highlights overcrowding, the use of shackles and the lack of medical care. The group has campaigned against the death penalty and praises the government's promise to commute death sentences to life imprisonment.
That makes improving prison conditions even more important, it says.
Thailand's prisons are built to hold about 100,000 people - but according to the government's own figures, they are holding more than twice that number.
As a result, the conditions, says the Union for Civil Liberties, are horrendous.
People have to sleep in tight rows on hard floors. In these sleeping cells, each prisoner has an average of one square metre - as opposed to the four to six square metres described as the minimum by the Council of Europe.
Danthong Breen, chairman of the union, says the overcrowding is shocking.
"In the women's prison it's particularly bad. You have 200 women in a single cell," he told the BBC. "If one of them has to get up at night to go to the toilet, they all shift a bit and when she comes back the space is gone and she has to stand up all night.
"The level of crowding is inhuman and inhumane."
The other horror, he says, is the widespread use of shackles.
These are welded on to the ankles of long-term prisoners and are not removed, even during illness, until the sentence is served.
The United Nations has criticised the practice. The Thai foreign ministry has promised to end it. The constitutional court ruled the practice was wrong.
But the reality of the over-crowding and a ratio of warders to prisoners of about one to 45, makes the practice hard to stamp out.
Prisoners with money are able to improve every aspect of their life behind bars, Mr Breen says. But a lack of government money is holding back investment in new facilities and extra staff.
The civil liberties group suggests Thailand could look more at using non-custodial sentences. It estimates at least half of those jailed are being held for drugs offences.
And it hopes that whatever government emerges from elections next month, the promise to no longer impose the death penalty is kept.
Posted by hrdefender at 8:03 PM