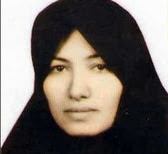 Sakinseh Mohammadi-Ashtiani, 43 years, was condemned to death for adultery.
Sakineh M Ashtiani, has two children, and has been imprisoned in the northwestern Iranian city of Tabriz since 2005. She was already lashed 99 times in 2006. She was sentenced to death by stoning but due to international outcry the sentence to death by stoning was cancelled. It was reported that it was still possible that she would be hanged. However, in a new development she was put on a state-run TV programme where she confessed to adultery and involvement in the murder of her husband. Speaking shakily in her native Azeri language, which could be heard through a voiceover, Sakineh Mohammadi Ashtiani told an interviewer that she was an accomplice to the murder of her husband and that she had an extramarital relationship with her husband's cousin. Her lawyer claimed that his client, a 43-year-old mother of two, was tortured for two days before the interview was recorded in Tabriz prison, where she has been held for the past four years. "She was severely beaten up and tortured until she accepted to appear in front of camera. Her 22-year-old son, Sajad and her 17-year-old daughter Saeedeh who had strongly defended the innocence of their mother, are completely traumatised by watching this programme". She is now in danger of execution either by hanging, or by stoning, the possibility of the latter punishment being reintroduced by the new charge of murder.
Whatever the complexities of the case, her execution clearly lacks all legitimate legal procedure. It is unspeakable that she should be stoned to death on any count.
Iran is reckoned to be an Asian country so that we have a particular interest in the case. We recommend that our readers address their dismay and rejection of the awful punishments unjustly menacing this woman. We may do so on arguments of justice, but we can also appeal to the motivation of an Islam whose primary attribution of Allah is that he is All Merciful.
The name and address of the representative of Iran in Thailand are:
H.E. Mr. Majid BIZMARK
106&106/1 Soi Charoen Mitt,
(Ekamai Soi 10) Sukhumvit 63,
Khlong Tan Nuea, Watthana,
Bangkok 10110
whose duty is to convey the communications of Thai people to his superiors.
Posted by hrdefender at 8:40 PM