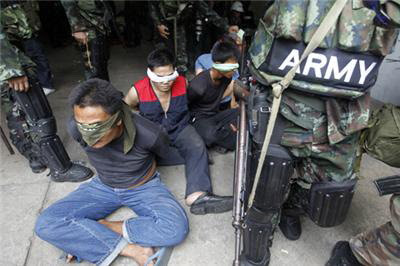 "The government's Centre for the Resolution of Emergency Situation (CRES) has warned that people who are guilty of terrorism charges could face a possible death penalty."
19th May 2010

Response:The threat by the DSI that people convicted of terrorist charges in the current situation in Thailand could face a possible death penalty is ill-advised and ill-timed. It reveals the mentality of government agencies within hours of the largest massacre of Thai civilians in recent Thai history, that they are ready to threaten further death.
It is ill-advised to invoke a penalty which is against the most fundamental of human rights and which is rejected by the large majority of the nations on earth. Moreover, there is strong evidence that a threat of capital punishment is not an effective deterrent against any crime. It is ill-timed to invoke the charge of terrorism which the government has used as justification throughout the present crisis, before such a charge has been explained or proved by evidence, at a time when government responsibility for the deaths of unarmed civilians is been questioned. It can only add fuel to the fire of resentment widespread in the country. There most urgent need now is for understanding, reconciliation, and mediation. While justice is required for acts which are illegal, this justice must not be burdened with the threat of a punishment which is no longer acceptable in international law, and which would prolong the contempt of the right to life we have witnessed in recent days.
Finally, one may recall to the DSI that the second human rights five year plan on human rights, passed by the government in 2009 and acknowledged by all government ministries, includes the proposal to abolish the death penalty.
Posted by hrdefender at 7:41 AM