The Scandal of Shackling 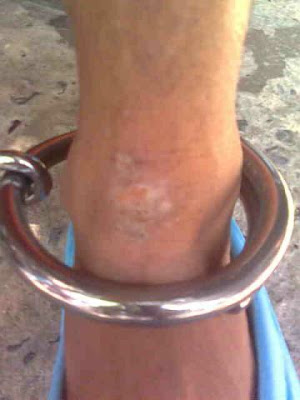 The permanent shackling of prisoners in Thai jails who are condemned to death remains a serious scandal. The comment of the UN Human Rights Committee on this issue was especially forceful; “The use of shackling and long periods of solitary confinement should be stopped immediately”. UCL has followed the issue of one prisoner with particular interest. The prisoner submitted a complaint to the Administrative Court that his being shackled was against Thai law, prison regulations, and International Law. The Court responded by ordering that the shackles of this prisoner be removed while they considered the case. However, after the shackles were removed the prisoner, who was being held in Klong Prem prison, was transferred to Bang Kwang prison where he was again shackled. When the prisoner protested at such an infringement of a court order, the authorities replied that they knew nothing of such an order. Finally, on 16th September 2009, in a long and closely reasoned judgment, the Court handed down the decision that the shackles be removed. The prison was given 30 days to comply with the order. Two months later the prisoner remains shackled. The prisoner was informed verbally that the Correction’s Department was appealing the Court order. Details of the appeal are not available to the prisoner or to anyone else. The judgment applies only to the prisoner who lodged the appeal. Other prisoners must undertake a similar lengthy legal process to win relief.
Like most shackled prisoners, the above prisoner suffers from lesions caused by the chains, as shown in the accompanying photograph.
Meanwhile we are investigating reports that a prisoner remanded for deportation in the Bangkok Remand Prison has died on the 1st August 2009 from an infection caused by shackles. Fellow prisoners are prepared to testify but as the body has most likely been cremated, it is unlikely that adequate proof can be obtained.
Posted by hrdefender at 8:12 PM