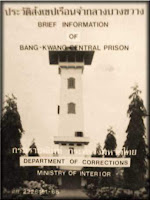 Conditions in Bang Kwang Prison
A year ago Bang Kwang Prison was listed by the Times Newspaper as one of the ten worst prisons in the world. However, conditions there have improved; there is now at least one worse prison in Thailand itself! The following is an up to date summary of the conditions for Death Row prisoners, most of whom are held in Bang Kwang.

OVERVIEW OF THE CONDITIONS OF DETENTION IN DEATH ROW
The Prison of Bang Khwang in Nonthaburi, Bangkok, consists of 13 buildings. Apart from building 8 (factories), 9 (kitchen), 10 (solitary confinement), 11 (executions) , 12 (hospital), 13 (university and pigs), 15 (coffee shop), each of them is composed of cells of similar size and capacity. The total capacity of the prison is 4,000 and the number of prisoners amounts at present to about 4130.
Building 1 which used to host all death row inmates is now closed and death row prisoners are located in buildings 2 and 5, separated from other prisoners, including those condemned to life imprisonment.
Death row prisoners are between 20 to 30 people to a cell, all together, without any distinction regarding their age, offence or the status of their case. They sleep on blankets lying on the floor. Electric lights are on 24 hours a day. They can shower every day but are provided infrequently with toiletries. They are chained at the ankles 24 hours a day for the entire length of their stay on death row.
Their daily routine is as follows :
The cells open at 7.30 am for breakfast. They can go out to exercise and/or study until 11.00 am. Lunch is served between 12.30 and 1 pm. They are locked back in their cell at 2.30 pm or 3 pm depending on the day. No dinner is served. The two daily meals are composed of rice and a soup with pieces of meat or fish. They can take as much rice as they want for lunch. No free coffee or tea are available.
They have no possibility to meet with other prisoners. They can only study or exercise among themselves.
They are allowed 2 visits a week, on Tuesdays and Thursdays. The first round of visits starts at 1 pm until 1.45 pm and the second round starts at 1.45 until 2.30 pm. Visitors must arrive half an hour prior to the visiting time.
They are allowed phone calls twice a week for 5 minutes. The use of cell phones is prohibited.
They are allowed to write letters. However, the content is censored and the letters cannot be too long or contain any explicit complaint.
In case of ill-treatment, prisoners can submit a complaint to prison authorities. However, the death row inmates in Bang Khwang are usually a lot more subject to depression than to physical violence. That is why moral support from the outside, especially from families and friends, is so essential to them.
Posted by hrdefender at 10:38 AM