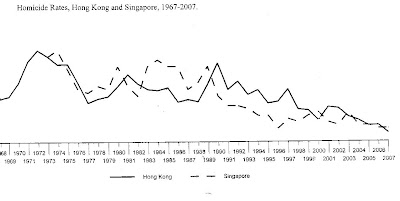 Singapore and Hong Kong are twin cities, comparable to each other in almost every way. While the population of Hong Kong is greater, population densities, population growth, levels of education, and per capita income are practically the same. However, Singapore believes that public security requires it to impose the death penalty at the highest rate in the world per million population. Hong Kong abolished the death penalty in 1994. The graph at the head of this post reveals that the death penalty has had no effect in reducing the rate of homicide in Singapore over that in Hong Kong, in the period since 1994. The knowledge that the death penalty is not an effective deterrent has lead the majority of the world's nations to abandon this barbarous practice. Perhaps the death penalty is retained by Singapore in support of a policy of social intimidation. At any rate it clings to a practice and mode of execution which it learned from its western colonial masters. Ironically, it now argues that abolition would be an imposition of western domination!
Posted by hrdefender at 3:48 PM