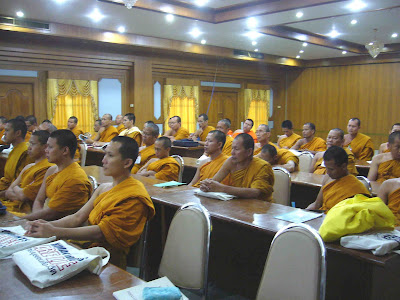 On 7th October we held the final of a series of seminars with Buddhist monks in Chachongsao Province, Thailand, on the death penalty. The following are comments of the monks taken from feedback forms.

“Buddhism does not support the death penalty, but concerning the abolition of the death penalty there must be a fixed standard which creates confidence that crime and the transgression of the human rights of others will decrease and be eliminated from world society. However there is no teaching in Buddhism which concerns the existence or non-existence of the death penalty. The important point therefore is what is acceptable to society as a suitable punishment.”

“The matter of the death penalty is a complex issue, and every position on the matter has its limitations. From the point of view of society the death penalty appears necessary or there will be no fear of wrong doing.
From a Buddhist viewpoint the death penalty should be abolished and be replaced by life imprisonment. Those already sentenced would not be executed but their human rights are restricted. Imprisonment is a restriction of independence and its form should measure the seriousness of the crime. It is a retribution for the crime committed.”

“Can we deduce some standard from the use of capital punishment in the past. There must be a clearly defined penalty for the most serious crimes, such as life imprisonment or other punishment.
Executions should be abolished, they serve no purpose. It is better to give an opportunity (for reform).
In the event that the death penalty is maintained, the law is the law, punishment is punishment. It is better that the authorities concentrate on other issues; education, the reduction of violence, the environment, the economy.”

“This project is of great importance in promoting abolition of the death penalty; capital punishment is absolutely incapable of reducing crime. Instead ethics and moral standards should be improved.
I believe that the death penalty should be abolished, its effects are bad rather than good. The effect on relatives of the executed person is devastating, I cannot stop pitying them. I devote my life to teaching Buddhism to solve the problems, but it is a difficult task.
The maximum sentence should be life imprisonment.”

“The arguments we have heard and the various viewpoints are consistent, but opposed in some ways. However, I agree that there should not be a death penalty. But my viewpoint is that before the death penalty is abolished altogether its application should be restricted so that the importance of life be fully realised. I would not like to see the death penalty looked on as a small matter. Before a final abolition it should be discussed from many angles and at many levels. If possible the decision should be made at a world level.”

“Buddhism should play a leading role in defining the human condition”

“While it is true that Buddhism does not support the death penalty, the people too should have a role in upholding the law.
• Some monks have a different viewpoint to others. If there is no standard, each one will think that his own opinion is correct and that of others is wrong; thus confusion arises and people cause hurt to each other.
• The good should be encouraged for the good are often at a disadvantage. ‘Severe punishment for great crime, lesser punishment for smaller crime’
• ‘All living creatures live according to their fate’

“The matter of Buddhism and the death penalty is a matter of fate, fate due to past deeds, the present and the future. To solve the problem of the death penalty we must deal with fate. Buddhist monks teach of fate, whether good or bad. Good action can overcome bad fate, and the question of the death penalty no longer remains. This is my opinion following the teaching of Buddha. In this matter one cannot appeal to rights. If we cooperate together to teach morality and its practice to the people so that they act well, the matter of abuse of human rights will no longer be relevant.”

“If the death penalty is abandoned there must be some substitute action, especially study. Morality must be included in the syllabus. One may speak about it, but its implementation is something else and human rights are invoked. Monks and teachers wish to teach their students to be good but they fail as they do not have a suitable syllabus. In fact we have such a syllabus but we do not have the opportunity to follow it. We are under the control of others who use their power for their own benefit. If we come into conflict with such private interests we can do nothing. For example, I teach mathematics but when I wish to teach the matter of religious practice I must do so outside the school, or try to organize a special camp. When the children do not attend they cannot be faulted. If there is no provision in the curriculum to teach moral duties, how can it be done?”

“This has been a very good seminar because it deals with an important aspect of humanity. If there is an opportunity I would like to participate again. May I confirm that the Buddhist religion is against the death penalty.”

“Buddhism does not agree with the execution of people”

“Buddhism teaches forgiveness, not the killing of people. It is therefore against the death penalty”

“In Buddhist teaching the killing of a living creature is prohibited. The death penalty is therefore excluded from Buddhism. Seminars such as this one should be organized on a wide scale for ordinary people, for government officials, for politicians, and for those who write the laws.”

“The content of this seminar is good, and I wish well to the organizers. Those who support the seminar are also very good. I would like to see knowledge on this issue being widely proclaimed in society”

“The subject matter of the seminar is good. The monks and novices derived knowledge on attitudes throughout the world. But it will take time for the death penalty to be rejected by society, greater study and more information are required”

“Shackling is necessary but the death penalty should be abolished because even though the condemned person has committed crime, reform should be allowed to occur”

“One must distinguish between punishment and religion, because the world is full of evil people”

“Buddhism should be the national religion, and designated as such in the Constitution. The death penalty should be abolished as it is against religion”

“Religion and worldly matters should be separate”

“An important basis of religion is the prohibition on killing of any creature. Such killing is a sin, whether it is of an animal or a person. Buddhism therefore is against the death penalty”

“Religion teaches people to be good and the forgiveness of those who do evil. Thus there should not be a death penalty”

“Concerning abolition of the death penalty, I believe that it will take time to bring about understanding in every part of society regarding the importance of being merciful and of extending kindness”

“The holding of this seminar is good. It should be repeated in temples where there are monks and novices”

“I agree with abolition of the death penalty. It has no part in Buddhism”

“If the death penalty is abolished, what punishment will be substituted? If there is not an appropriate punishment people will not be deterred from doing evil.”

“It is necessary to shackle prisoners to stop them escaping. As for the death penalty, it is in contradiction to Buddhism. But whether it is abolished or not is a matter of the law”
Posted by hrdefender at 9:15 PM