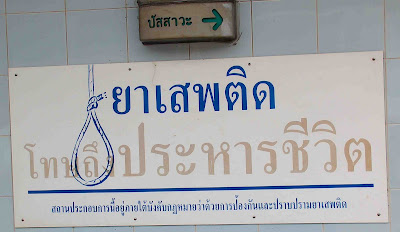 The above photograph was taken recently at the entrance to a toilet in a Bangkok petrol station. It warns that drugs entail the death penalty and originates from legislation on the control of drugs.

We submit the following comments:
As contained in the UN Economic and Social Council resolution of 1984/50 of 25 May 1984
These rulings were recalled to the 29 member Thai delegation submitting a report on its obligations under the INTERNATIONAL COVENANT ON CIVIL AND POLITICAL RIGHTS during the 84th Session of Human Rights Committee, in Geneva in July 2005

In the United Nations General Assemly of December 2007 a majority vote recommended a Moratorium on the Death Penalty in all member countries. Thailand voted with the minority against the Moratorium.
Posted by hrdefender at 9:51 AM