Justice should be seen to be done 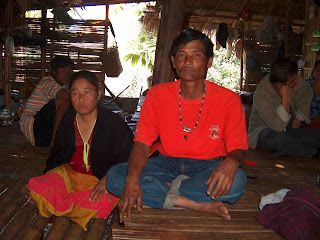 On a Karen man rode a motorbike returning to his home from the market town of Ban Rai. At a distance of about 6 kms from home he was killed by a single shot fired by an unknown assailant. The body was discovered about half an hour later. An autopsy on the body found that death was due to a wound caused by a shot gun, that the deceased rode a Suzuki motorbike of unknown registration and that the body was taken by a daughter to perform the usual rites.

The murdered man had been a contentious person who had made many enemies in his own and in neighbouring Karen villages. Complaints against him included concern for missing funds in local cooperatives. Among the several villagers who had quarrelled with him was one Dei Zou Naa. Speaking about the matter recently the Kamnan of the village remarked that the quarrel with Dei Zou Naa was typical of the many minor quarrels which occur between villagers living in a closed community.

Little is know of police investigation at the time. Police were later to affirm that their access to the area was affected by communist influence in the area which they claimed was a ‘pink’ zone. The only evidence they found was the butt end of a hand rolled cigarette and betal spittle, which they believed to indicate that the murderer was a hill tribe man.

Karen villagers form a close community with many social interactions, mutual dependence, and family relationships. A murder affecting these relations would be a major disturbance to normal life. A ceremony of appeasement was held before a village monk where the wife of the murdered man drank sacred water and denied that she held any vindictive feeling against members of the village, nor did she blame any particular person. At the time she had a son who was about one year old.

Years passed and the murder appeared to have little further relevance. The son of the murdered man went elsewhere to attend school, returning about three years ago as a grown teenager. He appeared to inherit the contentious character of his father and began to approach the Kamnan of the village asking him to arrest this one and that one whom he suspected of being the person responsible for murdering his father. The Kamnan refused saying that there was no evidence to implicate the persons suspected by the son. Finally, the son persuaded his mother to lay charges against Dei Zou Naa with whom she had normal friendly village dealings throughout the years. Dei Zou Naa, 66 years old, was arrested for the murder of nineteen years before. He was charged in court, found guilty, and condemned to death, a penalty then moderated to life imprisonment, a living death for a 66 year old man.

The conviction astonished the villagers of Ban Tai who remembered well the events of the day 19 years before. At least 15 of the villagers, among them the present Kamnan, asserted that Dei Sou Naa was with them throughout the day husking rice. Husking rice using a foot operated pestle was a community event, each family bringing their rice and taking turns to pound the husked rice. Dei Sou Naa had neither motorbike nor bicycle by which he could travel to the scene of the murder, and a long absence could not have passed unnoticed. Besides he would have had to pass houses in the village where his passage would have been noted. Villagers also testified that Dei Zou Naa has always been a quiet and peaceable person noted for his readiness to help others. They cannot believe that he would have carried out an act of violence. It seems that their testimony was not considered by the court.

At present the case is in appeal. It is difficult to understand the conviction on extremely flimsy evidence, a cigarette end and betal nut spittal of 19 years before. The lawyer acting for Dei Zou has firm hope that the will reverse the verdict.

Meanwhile bail is refused for fear that Dei Zou might flee. The wife of the convicted man has become paralysed and needs his presence, He himself is prematurely aged; to where could an elderly Karen, dependent on his village community, flee. The Karen villagers are deeply disturbed and their sense of justice injured. Their reaction reflects well the criterion for sentencing in a case incurring capital punishment which requires ‘clear and convincing evidence leaving no room for an alternative explanation of the facts’.

Posted by hrdefender at 3:48 PM