The Issue of Shackling 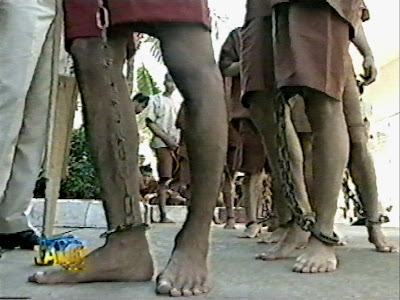 In July 2005 Thailand presented to the Human Rights Committee in Geneva its report on the implementation of its obligations under the Covenant on Civil and Political Rights. In its response the Human Rights Committee issued a stern admonition that the State "should guarantee the right of detainees to be treated humanely and with respect for their dignity". The issue of shackling was given special attention; "The use of shackling and long period of solitary confinement should be stopped immediately". Yet, two years later prisoners condemned to death are still permanently shackled. UCL has drawn attention again and again to the admonition of the Human Rights Committee and the obligation under international law to implement the terms of the Covenant. The response has been that the prison authorities are 'not yet ready' to fulfill their obligation.

To the shame of the prison authorities, prisoners themselves are taking legal initiatives against the unjust practice. A first case was submitted to the Administrative Court against the Corrections Department on the grounds that perpetual shackling is against Correctional Policy Guidelines, and causes mental stress and physical difficulties to prisoners. Photographic evidence of prison conditions demonstrated that shackling could not be claimed necessary to ensure the secure detention of prisoners. The Court immediately ordered that shackles be removed from the prisoner who submitted the complaint while the case was under consideration. On this decision another prisoner also invoked legal action. In this second case the decision of the Court has already been handed down, that perpetual shackling is indeed illegal. At present fifty prisoners are bringing similar action. If the precedent has been established it is difficult to see how a favourable decision will not be granted in other cases.

A worrying consequence is that prisoners whose shackles have been removed are being restricted to their cell block, unlike shackled prisoners who are free to go outside.
The Corrections Department is appealing the case where a decision has already been given. Can this be considered acceptable given the ruling of the Human Rights Committee two years ago?

And does the Corrections Department intend to oppose the legal case of every individual prisoner who seeks redress under the law?
Posted by hrdefender at 11:14 PM