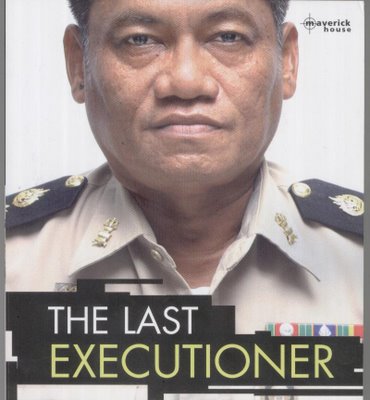 This is a distasteful book. It is a book of no literary merit, little imagination, and little of human feeling. But it tells the story in plain, unadorned language of the most distasteful job on this earth, that of a public executioner. It is an unacceptable job, no one should be called on to carry out judicial murder and made to believe that it is their duty to do so. The task of execution highlights the whole repugnance of the death penalty and the gradual realisation of this is leading to its ultimate abolition.
Chavoret Jaruboon was an ordinary young man who sought the prison service as a stable employment. He was assigned to Bang Kwang, the high security prison in Bangkok where male prisoners condemned to death are detained and where executions are carried out. Others would have kept well away from the death chamber and its rituals but Chavoret wandered in when the machine gun was being serviced and was instructed in its operation by one of the executioners. He must well have realised where his interest would lead. He was recommended to join the team of executioners and progressed through the various levels of responsibility until after ten years he became executioner.
Chavoret's motivation for taking the steps which led to his position are never clearly stated. He obviously has the careful technical ability required to operate a weapon that can give problems, an ability which would not otherwise lead to promotion in the prison service. He is a meticulous person with great control of his feelings and an unquestioning respect for authority, the qualities which certainly led to his selection as executioner. He does not glory in the comradeship of the prison staff but enjoys the regard of his superiors, the chance to perform before the highest authorities, and to make an impression. The 2000 baht fee earned for an execution helps towards the education of his children.
His mental rationalization of his function is a simple one. There are people who are pure evil, "I believe that there are truly bad people who can never be cured of their desire to do depraved things... I believe this type of person deserves to die". Deliberately, he refuses to know the story of the criminals to be executed until after their death lest any personal feeling might affect his efficiency. His duty is to carry out the execution efficiently. Regulations must be complied with but for the rest there must be no delay or mishap which would prolong the agony of prisoner or other participant. Early in the book he repeats his simple belief that the death sentence is justified, and justifies his participation in carrying it out.
It is only at the end of the book that he admits that "killing criminals troubled and depressed me". He has come a long way, "I have come to believe that severe punishment does nothing to solve the problem of crime but it should function as an extreme warning" without seeing the contradiction in this sentence. He reflects further "I believe in karma, which can be bad or good depending on the individual. I never got any pleasure out of shooting people, or out of performing any other role in the persecution process. It was my job". Buddhism gives him the excuse "the convicts on death row are swamped in bad karma and the executioner is doing them a favour by sending them on to their next incarnation for the chance to redeem themselves". It is to his credit that this opinion is quoted from Buddhist monks and he does not adopt it as his own.
Executing 55 men and women in a working life is an abomination. The memoirs of Chavoret Jaruboon are a sad and distasteful story. In the end he cannot justify his choice in life because there is no justification. The value of his story is surely to instruct those who form the chain of command in the justice system that their adherence to capital punishment is also their karma as much as if they pulled the trigger of the machine gun. And so for all of us who acquiesce to this perversity of justice without declaiming 'Not in my name'
'The End of the Death Penalty' refers like the title of the book 'The Last Executioner' to the end of the death penalty by machine gun. Since 2003 Thailand has replaced the machine gun by lethal injection. There are now three executioners where one sufficed before, and the process is no less horrible.
'The End of the Death Penaly' looks forward in hope to the day when this awful practice will truly end.
'The Last Executioner' is available in Asia Book Store
Posted by hrdefender at 1:59 PM