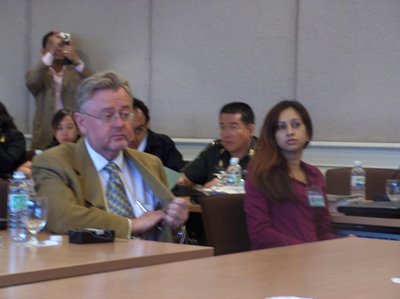 National Seminar on Capital Punishment in

On 3rd and 4th July seminar on the death penalty was organized by the for Civil Liberty under the auspices of the National Human Rights Committee. Those attending were largely representatives of Government ministries with an interest in legal affairs, such as the Ministry of Justice, the Corrections Department, and the Ministry of Foreign Affairs. Diplomats, academics, students of human rights, and human rights activists also took part. The International Federation of Human Rights and Amnesty International were represented showing the importance given to the seminar on an international scale. A total of 115 persons registered their attendance.

The seminar covered a wide range of issues related to the death penalty in Thailand. A full report is being prepared for distribution and will be available on this site. In this preliminary news item some highlights of the meeting are indicated.

The key speaker at the seminar was Professor William Schabas, a recognised world authority on the death penalty. On the first day he spoke of the inevitability that the death penalty will be abolished world wide, as have the institutions of slavery and judicial torture in the past. He based his assertion on the astonishingly rapid rate at which countries are declaring themselves in favour of abolition. Only a minority of countries persist in practicing the death penalty and they find themselves increasingly at a disadvantage in cooperation on criminal extradition with abolitionist countries. The most striking block of countries rejecting capital punishment are the countries of the Council of Europe and the European Union where rejection is a condition of membership. Professor Schabas has calculated that by comparing the number of retentionist countries with the rate of conversion to abolition, we can expect to see a world free of the death penalty in at most another 24 years. He pointed out that such an outcome was clearly in the minds of those who drafted the Universal Declaration of Human Rights who in Article 3 affirmed, without reservation, the right to life of all persons.
Professor Schabas enumerated the reasons in favour of the death penalty, the fear of wrongful conviction, the ineffectiveness of the death penalty in controlling crime, the victimisation in practice of the poor and disadvantaged who cannot afford expensive legal representation, and others. But he based his belief on the unacceptability of the death penalty, above all on the affront to human dignity which it implies.

On the second day of the seminar he laid out the principles of alternative punishment to the death penalty, which, simply stated, consists in life imprisonment. Life imprisonment can have different meanings allowing for parole or excluding it, but he declared himself ready to accept any preliminary meaning of the term in return for the willingness of governments to move towards abolition. The question of the meaning and practice of life imprisonment can be evolved over time. The practice in some states of interpreting life imprisonment as extending to the natural death of the condemned leads to a meaningless geriatric detention of people no longer capable of offending or even realising where they are and why they are there!

Another highlight of the seminar was a session on the recent Philippine experience of abolition. Speakers included His Excellency Antonio Rodriguez, the Philippine Ambassador to , and Attorney Theodore O. Te who had played a large part in fighting for abolition. The detail of the debate to abolish the death penalty, over a period of 12 years illustrated the complexity of issues involved. Lobbying had to be continuous and focused. An interesting aspect was the involvement of condemned prisoners themselves and their families, simple people who achieved a sophisticated level of appeal. Another aspect was the preparation and submission of case studies illustrating defects in death penalty legislation and practice. The example of the was frequently referred to throughout the seminar.

A presentation by representatives of three main political parties was illustrative of the general lack of appreciation in for the world wide debate on abolition. The representatives agreed that a decision for abolition could be made at administrative government level without the need for changes to the Constitution. It was felt that time was needed for to adjust to the circumstances of abolition. The representative of one Party specifically claimed that the death penalty was necessary in for the defence of the revered institution of the Monarchy. A comment from the audience suggested that the , , and appeared capable of being both monarchies and abolitionist.

The second day of the Seminar began with the presentation of case studies describing the legal procedures of several prisoners whose sentence of capital punishment remained after all stages of court hearing were exhausted. The cases were of accused whose poverty made them dependent on legal aid. The most striking aspect was that after the passing of death sentence by the court of first instance, their legal submissions to the Appeals and Supreme Courts were prepared not by a lawyer but by a fellow prisoner supposedly skilled in such matters. The lack of professional participation in what should have been the most important part of the legal process is chilling.

In the final session Dr. Waemahadee Waedao, member of the Senate, discussed prison conditions in the light of his own recent imprisonment in the South of Thailand. He discussed the general conditions of his imprisonment which were in direct conflict with the rights of a prisoner who had not been sentenced. He cited details of clothing, food, and medical care, as well overcrowding in the prison which grossly contravened his rights. He did not appear to be reassured by an assertion by a representative of the Corrections department that much was being done to improve the situation. Other speakers condemned as unacceptable the current practice of perpetual shackling of all male death row prisoners.

The above are brief indications of striking issues discussed during the Seminar. The content of other talks and sessions, and of points raised by the audience are also of great interest and will be made available in book form.